It had been a long time since the seminarians presented a play in the hall of the Major Seminary.  This year the Seminary community presented the play ‘Stejfen Jilħaqlu’, directed by Fr Joseph Bajada.  The play was staged on Sunday 24th November at 7.40pm, on Friday 29th Novermber at 8.00pm and on Saturday 30th November at 8.00pm.

This comedy had been presented for the first time in the 80’s.  The author of the comedy housed at the archives of the Major Seminary, was most probably Mgr Salv Borg.  The story is about Alessandru and Danjeli, sons of two rich men, Basilju and Kajju.  Alessandru and Danjeli took a loan to help a poor young boy called Ġiġi. Stejfen, who is Alessandru’s servant, does his best to cheat Basiju and Kajju out of their money to repay the loan.  Eventually, Basiju and Kajju find out what is going on.  The play has a happy ending when Basilju discovers that Ġiġi is his youngest son from whom he has been separated since Ġiġi was a baby.

Besides creating smiles and laughter, the play created an opportunity for the audience to get acquainted with the Seminary since, after the play, the audience was invited to go round the Seminary and see where the seminarians live, learn and get their formation to become priests. 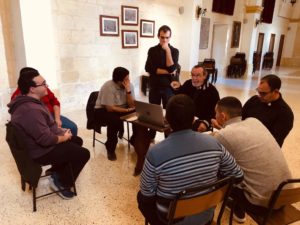 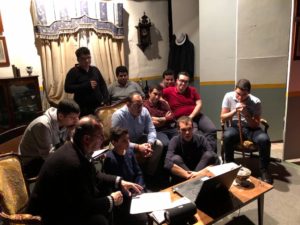