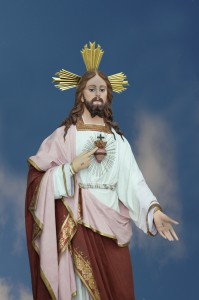 The Major Seminary welcomes candidates to the ministerial priesthood and offers them a programme of formation in conformity with the intent of the Catholic Church and in due consideration for the requirements and capabilities of the local Christian community.

It provides students with the appropriate environment to pursue their vocation; to acquire the human, spiritual, theological, and pastoral formation that is essential to their formation in pastoral charity; and to carry out effectively the ministry of the Catholic priesthood.

The Seminary seeks to support them in cultivating that fraternal unity that binds the diocesan presbyterium with the bishop; in deepening their awareness of the multi-cultural milieu of contemporary society; and in keeping in mind their universal mission.

At the same time, it fosters new vocations and supports the on-going formation of priests.

The Logo of the Seminary 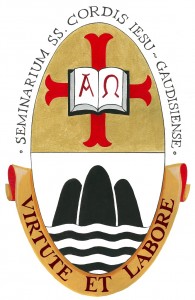 The logo of the Seminary of the Sacred Heart of Jesus is divided horizontally into two parts.  The upper part is golden and on it features a red cross of the crux furca type with an open book at its centre.  The book has the Greek letters A (alpha) and Ω (omega) printed on it.  The eight points of the crux furca represent the beatitudes that emanate from the embracement of faith.  The book with the letters A and Ω, that refer to Christ as the beginning and end of everything, is the symbol of the Word of God.  It is also the symbol of the sacred sciences that hold the figure of Christ as their main source and aim.  The cross and book represent the ideal of the Seminary – to join the study of the sacred sciences to the practice of the evangelical values.  Besides, the Cross and the Gospel are the way along which proceed all those who are called by Christ for priesthood.  The lower part depicts the coat of arms of Gozo – a silver background, with three black hills standing on six alternating black and silver, wavy lines.  The logo bears also the motto of the Seminary – VIRTUTE ET LABORE – which means “with diligence and labour”.