The Philosophical and Theological Library at the Seminary

The library at the Seminary has been used, in some way or other, since its founding.  There has always been a collection of books which the candidates to the presbyterate have used for their formation.  Today, this library is housed on the third floor of the Seminary, exactly above the building of the Minor Seminary.  However, it has not always been housed there.   Over the years the library has been housed in different places in the Seminary, and as the number of books increased, a larger space had to be found to house the books in an organized way. 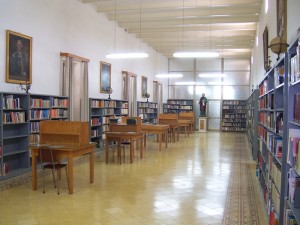 During the last thirty five years, the number of books housed in the library increased on the initiative of H.E. Bishop Nikol Ġ. Cauchi and other individuals.  All the books were classified according to the Universal Decimal Classification (U.D.C.), a classification which is accepted worldwide.  In 1996, a process was started so that all the information about the books in the library would be inserted in a database.  The two major sections of the library are the Philosophy and the Theology sections, including books on Metaphysics, Christology, Mariology, Moral Theology, Pastoral Theology, Ecclesiology and Liturgy.

Besides these two large sections, the library hosts smaller sections like Sociology, History of the Church, Canon Law, Official Document of the Magisterium and Patristic.  In the corridor on the side of the library one finds a large number of reference books: encyclopaedias on various subjects, dictionaries and commentaries.  In this corridor there are also various publications which the Seminary receives regularly and which are then bound in book form, according to the particular year of publication.

To facilitate the use of the library, a scheme in the division and the classification of books is followed in certain areas.  The visitor can go straight to that section of the library from where he wishes to do his research.  Besides, next to the library door one finds the Dewey classification system, a set of small drawers containing cards with information on each and every book in the library.  The cards are catalogued in alphabetical order, according to the author.  In this way one can easily find the book he is looking for by going straight to that section in which that particular book is kept.  To borrow a book one simply signs the Borrowers’ Card found in the book and which is then given to the librarian.  Some of the books cannot be borrowed because they are frequently on demand.  These are mostly reference books.

The library is indispensable for the seminarians.  It houses many books which they need for their academic formation, especially when in need of presenting a long essay as part of their Philosophical and Theological studies.  However, apart from being open to the seminarians, the library is open also to all those who wish to do some form of research work.

The library hosts also certain interesting collections, such as the Collana di Testi Patristici (Citta Nuova Editrice, Roma 1999) and  the Kollezzjoni tad-Deċiżjonijiet tal-Qrati Superjuri ta’ Malta, a series which is rarely found elsewhere.  In the inner section of the library there is the archive where a good number of old books used before the Second Vatican Council reform are kept.  These books are now of a great historical value.  There are also a collection of homilies and a collection of reports issued by the meteorological office which was found then at the Seminary.