In our seminary the preparation of candidates for the priesthood stretches over a span of seven years. Each year is “the Lord’s year of favour” (Lk 4:19), and each year should be lived in itself and for itself, and serve to help the seminarian to become one with Christ the High Priest. The formation for the priesthood is an immersion, a baptism into Christ the Good Shepherd. 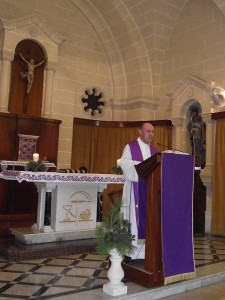 In his first year, the seminarian is invited to embrace charity, as a gift from God and to spread it around him, especially among the other seminarians within the Seminary walls. Living in a community for most seminarians is a first-time experience so they are very much concerned on being accepted and accepting others. They would seek to further deepen the virtue of charity, so that at the end they would be able to make a confessio vitae.
The second year seminarian is invited to be faithful to his vocation in the daily routine of life and to achieve this aim by seeking to be coherent and consistent. He is made fully aware that he has been chosen by God and that he is loved by Him; he is invited to scan the history of his vocation with the eyes of God. He is led to look into the affective dimension of his life, a dimension that cannot be overlooked in the overall formation of his character and vocation. He makes a profession of hope, a confessio laudis. He is called to help the community of the Seminary to live the simplicity of the daily routine.

The formation given in the first two years includes a strong measure of correcting and of strengthening the ordinary human traits of the young men in our care.

In his third year, the seminarian is guided towards a deeper awareness of his faith in Jesus and towards a closer union with Him. He is set on the road of conversion from false idols, so that by the end of the year he can make the profession of faith, the confessio fidei. 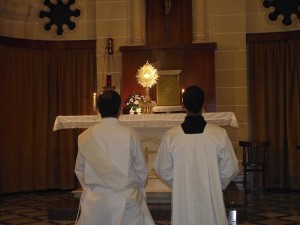 Within the community of the Seminary and in the following year abroad, the seminarian lives the enthusiasm of his renewed choice of following Jesus. For his intermediate or fourth year, the seminarian leaves the seminary, his family, and his country, to go to another diocese and live close to other priests in their pastoral work. It is a time of evaluation, discerning, and deciding the undertaking of the clear option of following Jesus in the priesthood.

On his return to the seminary, the seminarian begins to prepare himself for the ministry of the Lectorate. During the fifth year, the seminarian is encouraged to increase his esteem for the Word of God. Emphasis would be made on inculcating into him the conviction that the Bible should be the driving-force at the back of all his activities. The virtue that he would be encouraged to cultivate most is doing God’s will – obedience. In the community, he would become the animator of the Word of God; they are Prophets.

In their sixth year, the seminarian prepares himself for receiving the ministry of the Acolyte, first, and then for the ordination to the Diaconate. It is the year of the Eucharist and of Service. The seminarian would be further persuaded to appreciate the value of the celebration of the Eucharist and of Adoration. He would be trained to draw closer to the spirit of poverty, so that denuded of himself on the example of Christ, who is “presence” and “sacrifice”, and aided by the energy given him by Him, he learns to be of service to the poor. His work in the seminary should translate itself into attention to the needs of his companions, especially those in their first years and those passing through difficult moments. He also helps the community to shift attention from self to the needs of those around him. He is called to be shepherd. 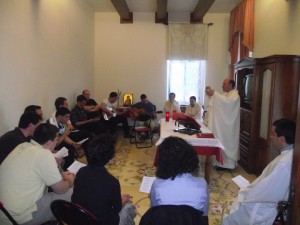 In his last or seventh year, the deacon is invited to make a synthesis of his priestly formation. He is encouraged to live the gift of chastity to the full by bringing himself more closely to the person of Jesus. It is celibacy that is deemed to be the synthesis of the priestly formation. The Virgin Mary, because of her total donation to God, is presented as mother and model. It is the year of the priesthood.

The paths that lead to the attainment of the objectives mentioned above are the ordinary moments of the spiritual life within the Seminary, namely: