Under the guidance of the diocesan promoter for vocations, the Seminary organises various vocational activities during the year for young men of different ages. For those over 16 years of age a monthly live-in is organised in some Retreat House of the diocese. For those of 15 years and over occasional meetings are held, approximately four times a year. 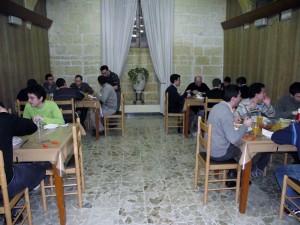 Three times a year the Seminary organises a vocational meeting followed by some recreational/educational activity for young men between 8 and 18 years. Twice a year it organises also another meeting for those over 15 years. They share with seminarians some moments of prayer followed by dinner and sports activities.

Besides that, every term the Seminary organises a week of prayer for vocations in a parish of the diocese. At the end of the week the whole community of the Major Seminary unites with the parish community to celebrate the Eucharist. Also the Rite of Lectorate and Acolytate, together with the Rite of Admission for Sacred Orders, are celebrated in different parishes with the intent of creating vocational sensibility and promote vocations. Every Thursday in most parishes an hour of Eucharistic Adoration is held for the same purpose.

Seminarians themselves play an important role in promoting vocations by their presence in the parishes every weekend and during holidays where they go for pastoral work. In their respective parish they organise a weekly vocational meeting for male students between 12 and 18 years of age.